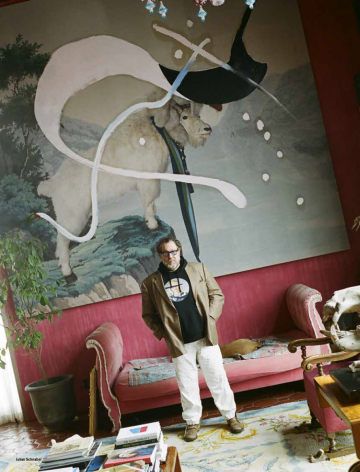 Julian Schnabel’s first film, “Basquiat,” was released in the summer of 1996. In it, Willem Dafoe plays a minor role as a struggling electrician who un-coincidentally harbors dreams of becoming a famous artist. The opening line of the movie is a voiceover by Rene Ricard “everybody wants to get on the Van Gogh boat”. So then what should we make of the fact that twenty-two years later the very same Willem Dafoe stars as Van Gogh in “At Eternity’s Gate,” the latest film by Julian Schnabel? “You make things that haven’t been made in order to see the things you’ve already made” is the artist/director’s somewhat cryptic response. In person, his banter is littered with stream-of-consciousness segues: part Colonel Kurtz, part Walt Whitman mash-up. It is true that Willem Dafoe was nominated for an Academy Award in the Best Actor category in 2019; however, Julian is quick to point out that he’s not “in Hollywood.” Mostly he’s in Montauk at his Stanford White house overlooking the Atlantic Ocean or at his pink palazzo in The West Village. One of his newest plate paintings depicts his son Cy as dead Christ, which - as logic would demand - then casts Julian Schnabel in the role of what…Joseph? Sometimes we forget that Jesus had two dads. There is a casual confidence in his latest undertakings, the self-assurance of a man playing to his strengths while still determined to explore. Some people might ask where does Julian Schnabel get off creating his own versions of iconic Van Gogh or Velasquez paintings? You need to look no further than his son’s namesake, Cy Twombly. When Twombly wanted a Picasso drawing to hang in his Italian villa he simply made one for himself. Seeing that , Julian painted a couple of Picassos himself ¡Basta!

BP I wrote a novella called “What We Lose in Flowers,” which is sort of loosely based on your life. After reading one passage, you texted me to say what a touching beautifully-written projection of yourself. By the same token, would you say that “At Eternity’s Gate” is a projection of you, Julian Schnabel?

JS I made a movie about Van Gogh, but it’s not just a projection of myself. In the movie, Dr Rey says to Van Gogh “you’re confusing people, you’re confusing yourself, you’re confusing yourself with your paintings.” And Van Gogh says “I am my paintings.” Well, that’s true. He is his paintings and I could say that I am my paintings. I am my movie. When I’m not around anymore that is who I am. Look at this painting I’m working on - everything that’s not in the painting doesn’t exist. It’s its own world with its own set of variables and conditions. The art stays, the artists don’t.

BP Perhaps the most significant part of any painting then is the side of the canvas where it meets the wall, because that’s the intersection of two worlds colliding.

JS The edge of the painting is one world. Everything else beyond that is of another time. The painting remains a constant. After a screening of the film, a guy got up during the Q&A and asked “What is reality?” And he was asking earnestly. He wasn’t asking about the facts versus fiction in “At Eternity’s Gate.” He was questioning the nature of existence. In fact, Willem Dafoe isn’t acting. He’s in a situation where he has to survive in the best way he can. He navigates with whatever tools he has that he can press buttons inside of himself to accurately respond in a way that will be acceptable to him. He’s not making believe. The process of making something is really all there is and in the case of moviemaking, recording it. I don’t understand people who have a job where money is their goal. And then they think “I can go on vacation now and relax before I go back to make some more money.” I don’t understand that mindset. You should read Jonas Mekas’ “In Defense of Perversity.”

BP Isn’t that the American way though?

JS It seems to be an accepted way of calculating success, yes. I found some photographs of Hemingway’s house and put a little spraypaint on top of them. So someone asks me “what did you have to say about Hemingway?” I used to think that William Carlos Williams said the truth is in things. But he didn’t say that. That was my perverted interpretation. I do believe the truth is in things. This is a photograph of an empty pool at Ernest Hemingway’s house in Cuba. That’s it.

BP A broken object is often perceived to exist in a diminished state, but you redeem these broken plates as paintings.

JS William Gaddis said “there’s a permanence of disaster here, left where we can refer to it…” The plate paintings are a way of noticing a property in the broken plates and commandeering their materiality to discover something new, to bring forth an object that didn’t exist before. Painting is called a practice because you are learning what to do with materials. The process of making a painting is different than the making of an image. An image itself is changing as it’s being painted. You have to let the horse run and just hold on to the reigns.

BP I love when you discover names for sensations that you’ve known your whole life. For instance, the pleasant smell of earth after the rain is called petrichor. Now we all know that smell, but some of us go our entire lives without learning there’s a name for it.

JS To name is to numb. What I came to know was that Van Gogh would make paintings of his own paintings. There’s more than one painting of the same fifteen sunflowers. So I thought if he can make paintings of his paintings, why can’t I? I had made a painting of Willem Dafoe as Van Gogh for the movie and because it’s a self-portrait, it should look like the actor. After I came home, I made a plate painting of Willem as Van Gogh. I felt like trying to paint a Van Gogh from life. I like to paint in the dark. Particularly if I’m painting portraits. I can see better in the dark. Color doesn’t get in the way. When I made the first plate painting “The Patients and The Doctors”, which isn’t a portrait, I painted at night with electric lights. When you paint in the daylight, it will always look better when you take the painting inside. When I took my first plate painting outside it looked bad to me like a woman who put her make-up on in a bathroom without any daylight. 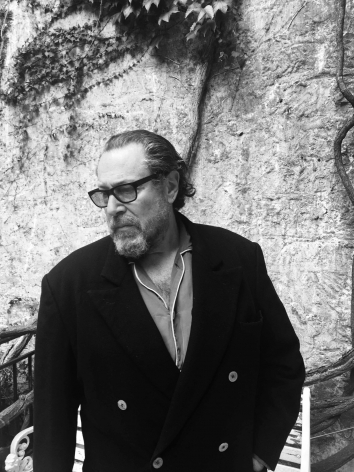 Julian Schnabel on Art, Film, and His Historic Home in the Hamptons Architectural Digest, Eva FedderlyJuly 24, 2019

The artist and filmmaker opens up to AD about his love of surfing, placing works in the Hamptons, and his Stanford White home in Montauk

Julian Schnabel has been finding solace in surfing since he was 15. “Surfing is like painting,” the artist, auteur, and iconoclast tells Architectural Digest in a rare conversation with the press. “It’s an antigravity machine.” It’s apropos, then, that he keeps a residence in Montauk out on Long Island to be close to the Atlantic's waves. The legendary artist and filmmaker lives in one of the few remaining Stanford White homes left on the East End, a sprawling property with sweeping ocean views. It is one of White’s original Seven Sisters homes, a group of large, shingle-style cottages built for the Montauk Association Historic District by White and iconic landscape architect Frederick Law Olmsted.

“He’s kept it in its total original condition; even the outside paint is original. It was lovely to see that Julian has treated the home with such respect,” says Wendy Van Deusen, curator of LongHouse Reserve, a Hamptons art museum that recently honored Schnabel at its annual summer benefit on July 20. Van Deusen first met the artist at LongHouse, and has since been invited over to his Montauk home and studio, which he has preserved in its natural state. “His studio is a short walk from his house that passes through the natural landscape of Montauk—it’s beyond imagination. Everything about Julian seems outsize, and the work space is just that: a true outside space that he created,” says Van Deusen, who formerly owned two of the oldest homes in East Hampton: the 1770 House; and the Baker House, built in 1640.

Schnabel recalls strolling LongHouse’s majestic 16-acre property for the first time, with its wandering footpaths and manicured gardens, but he didn't always intend to place works there. “I’m one of those people who wouldn’t want to be part of a club who wants me as a member—like Groucho Marx. But that being said, I went out there and looked at the grounds...it was a beautiful thing,” says the artist of the Reserve, which counts sculptures by Willem de Kooning, Yoko Ono, Dale Chihuly, and Sol LeWitt, as well as other striking large-scale works, among its offerings. Now, two of his large plaster sculptures with steel armature, Gradiva (1989) and Balzac (1982), rest near Yoko Ono's all-white oversized chessboard and the property's lily pond, respectively. “I think they define the space and look bold and solid, modern and ancient at the same time,” VanDeusen says.

As for Schnabel’s summer plans, the 67-year-old is still surfing out on Montauk and in Mexico, where he also has a home. He mentions with an air of excitement that Michael Oblowitz’s surf documentary Heavy Water will debut at East Hampton’s Guild Hall on July 25, and that he will give the introduction. “The movie’s the best surf film I’ve ever seen,” says Schnabel. “It’s really, really good. It’s definitely not a bunch of testosterone guys patting each other on the back.” The artist is no stranger to the film world: He's written and directed a handful films, including Basquiat, The Diving Bell and the Butterfly, and, recently, At Eternity’s Gate, about the life of Vincent van Gogh.

Heavy Water chronicles the career of surfer Nathan Fletcher, son of legendary surfer Herbie Fletcher, whom Schnabel has surfed with since he was 16 years old. In the film, Nathan Fletcher jumps out of a helicopter and takes on the waves on Hawaii’s North Shore. “This is not a travelogue. This is a life and death kind of thing. People die,” says Schnabel. “[The film] has a lot to do with redemption, camaraderie, family love, and talent.” An exhibition on the Fletcher family's adoration of the sport will open at Gagosian in New York on July 25, concurrent with the publication of Fletcher: A Lifetime in Surf by Rizzoli, which traces the surfing counterculture from 1950's to today, and features anecdotes by Schnabel.

Despite his reluctancy to speak with the press about his work ("Anybody who wants to look at my work should just go look at it wherever they can find it. I don’t really need to explain it to anyone"), it's clear that Schnabel is loved. His art-world reputation for being complicated, perhaps even a curmudgeon, belies a tenderness in the polymath. When Laurie Anderson, an avant-garde performance artist and a close friend of Schnabel's, introduced the artist at LongHouse, she said, "When I think of Julian, I think of... how immensely capable he is of love." 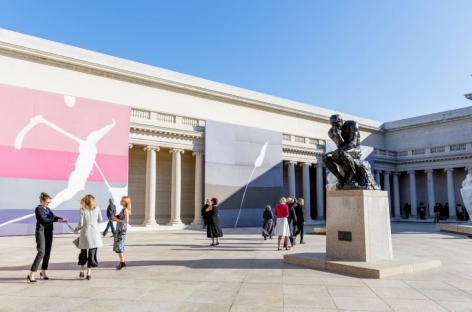 Julian Schnabel on How His van Gogh Biopic Is the ‘Mean Streets’ of Art Movies Garage, David Ebony
View More 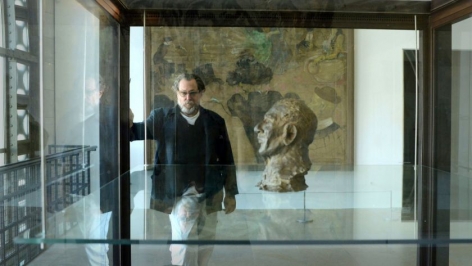 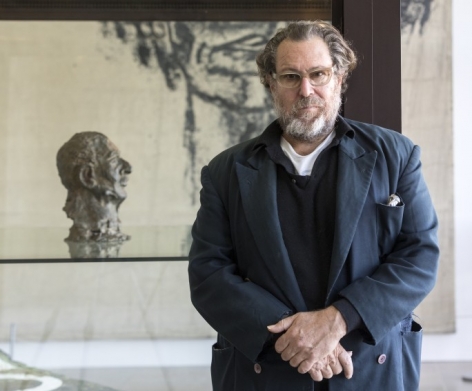 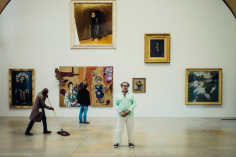 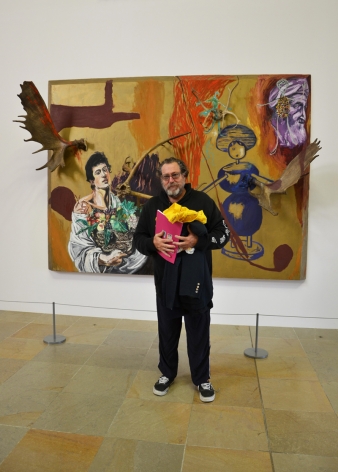 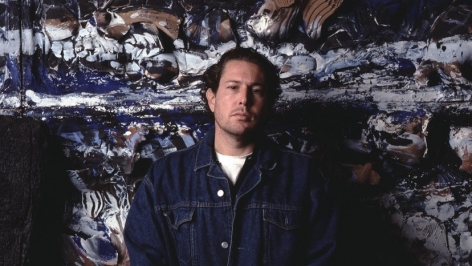 A Year in the Life of Julian Schnabel GQ, Sophie McBainMay 15, 2018
View More 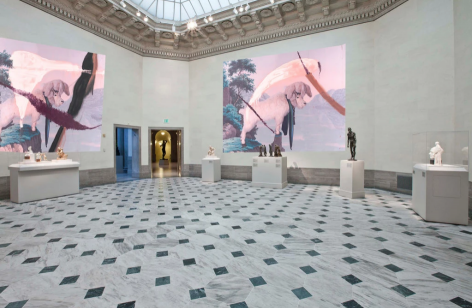 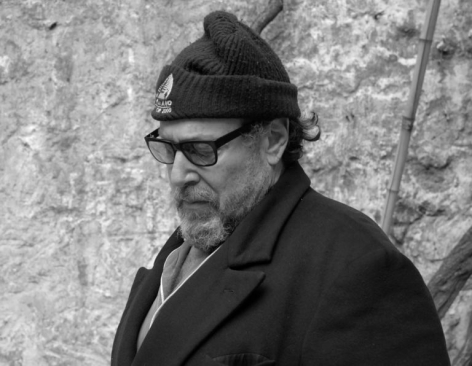 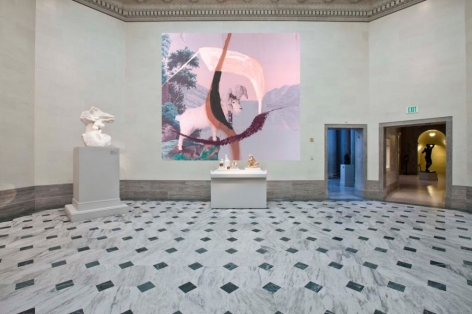 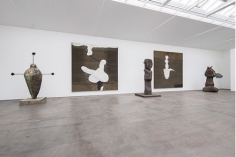 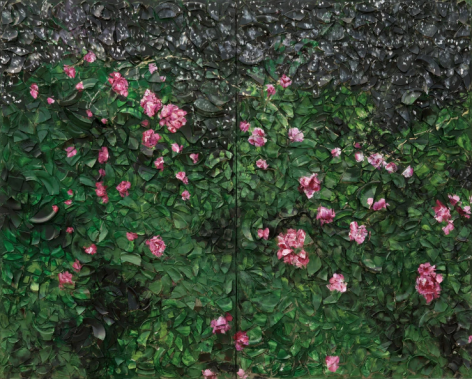 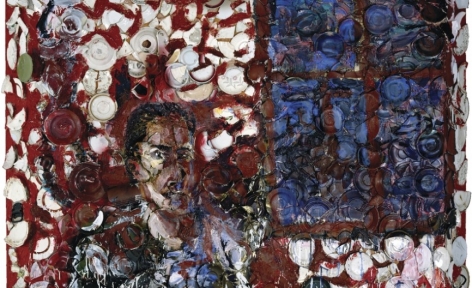 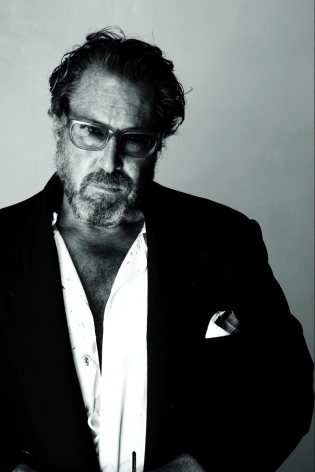 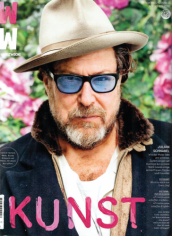 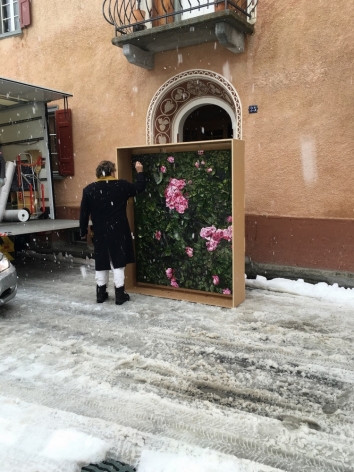 Art in Between. An Interview with Julian Schnabel Artribune, Arianna TestinoMarch 6, 2016
View More 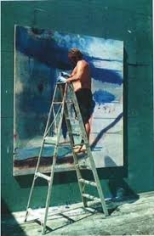 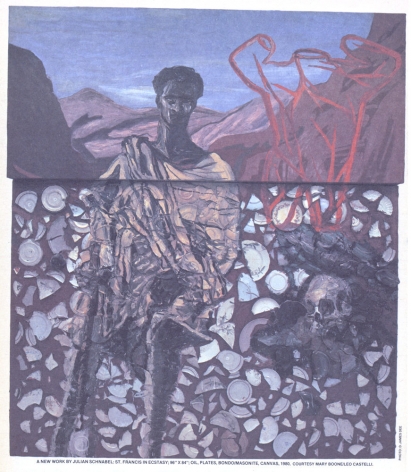 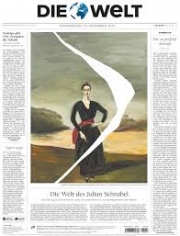